Looking for something to do on a Tuesday night in Buenos Aires? Come to San Telmo to see live stand-up comedy in English from the hilarious GringGo! (comedy that porteños won’t understand). You’ll laugh your head off and learn more about Buenos Aires culture and the expats that love and hate it here than you would on any tour or in any bar.

Let’s start with this video we shot last week featuring snippets of the four comedians in the regular lineup.

First up is Francesca Fiorentini, the MC of the show. She’s great at getting the audience juiced up and segueing from one act to the next. I particularly like her jokes that play with language and the biting criticism of us expats, especially from the States. She also writes, produces, directs, and stars in a YouTube web series called Laugh to Not Cry.

Next is Kate Sedgwick‘s edgy humor often about relationships and trying to navigate singledom in another country and language will make you uncomfortable (in a good way) and if, like me, you relate to what she’s saying, your face will turn beet red. Kate is also the creator of a Moth-like storytelling event that takes place in Buenos Aires one a month called Second Story. 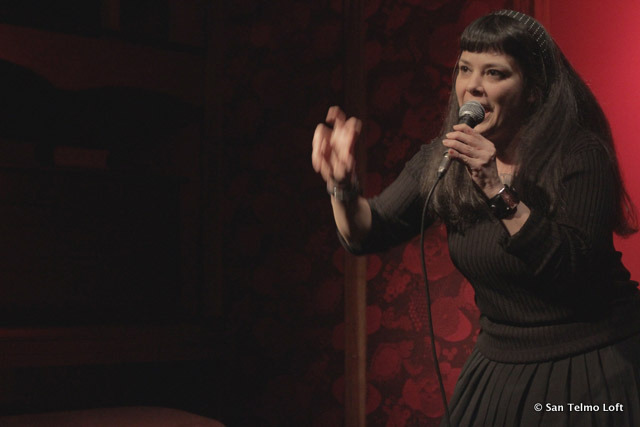 Then we have the one Argentine of the group, Ana Carolina. She begins with a bit of slapstick humor and has an amazing rapport with the audience. When Ana Carolina goes off script it’s because a hilarious opportunity has popped up and she’s not going to miss it. Quick, physical, and terribly insightful. Ana Caroline does comedy in many forms: Rosita Stoned is the most laughable, I think.

And last is Daniel Tunnard who has been here long enough to seamlessly put a dry British humor spin on all things Argentine. A wealth of experience (i.e. great stories to tell) and a delivery that’s natural and endearing. Daniel is also the author of Colectivaiseishon and Freddiementary. This is the guy that has taken every single bus (colectivo) line in Buenos Aires and lived to write about it. Hilarious comedians in English and in San Telmo on Tuesdays!

I’m thrilled that they’re here in San Telmo and at Cafe Rivas (arriba de Rivas). We’ve blogged about this venue before back when they hosted La Jaula Abierta, an awesome live music show that is no more. Cafe Rivas is on my list of recommended spots in San Telmo for lunch, dinner, coffee, drinks, you name it. It feels like an old New Orleans restaurant, beautiful decor, serves food or drinks at all hours of the day, and friendly wait staff.

Arriba de Rivas, where the shows take place, doesn’t offer the same menu as the cafe below, but the two dishes — a beef stew and a vegetable stew–are good and since the show starts at 9pm, you’ll likely be hungry. Plus, the service last Tuesday was great. Very professional and friendly. I’m thrilled to have GrinGo! in our neighborhood. Come join us on Tuesdays for a great laugh in a lovely spot.

Have you gone to a GrinGO! show? Share your favorite parts (no punch lines, please) below in our comments. Thanks!