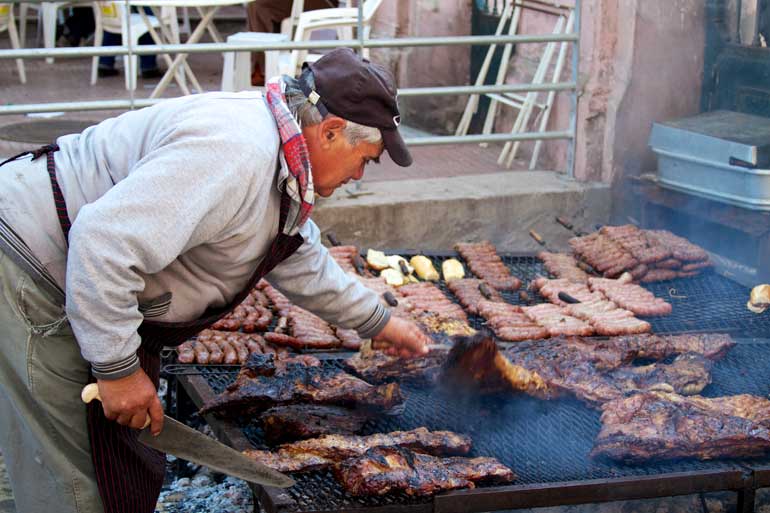 The strike has ended for now, so it’s time to beef up again. For tourists, that’s a very good thing since eating Argentinean beef should be at the top of all non-vegetarians’ list of “What not to Miss.” You can opt for an upscale restaurant and order a lomo (tenderloin) with a dijon-béchamel sauce and fancy potatoes or you can go native. Going native, however, requires a quick Asado 101 course. So here goes. Should you be invited to someone’s house for an asado, prepare for hours of gorging. My first asado lasted 12 hours and I left before several other guests. The word asado is actually used to describe the entire meal, the event, the feast. There can be confusion between how Argentines use the words asado and parilla.

Say you’re talking with some friends about where to get dinner. If what you want is meat, you’d probably say “Let’s have asado.” But once you’re in the restaurant, you’d order the parilla and they’ll bring out a small grill with coals keeping the meat warm. Starters:
Typically, an asado begins with achuras (which actually comes from the Quechua language and means “sharing” or “distributing”). But here we’re talking about the various internal organs that whet your appetite before the upper-end cuts come out. You can decline the achuras if they make you queasy, but you’d be missing out on one of the best parts of the asado experience.

Because different cuts require more or less time on the fire, the asador will bring out a wooden plate of achuras one type at a time. The plate gets passed around for you to either snag your piece or pass it on. Here are the most common achuras listed in order of my preference (in case you want to try only a few) and their definitions. The last three are achuras I’ve never gotten used to eating. Higado (liver) and lengua (tongue) other entrails that Argentines eat but aren’t typically part of an asado.

Main Course:
The preparation of the cuts of meat is incredibly simple here. There’s no marinating, just a bit of salt to bring out the flavor. Most tourists are surprised that it’s so simple. But the complexity comes in the actual cooking of the meat. This is a true art form.

Argentines are serious about their beef. Beef consumption here is approximately 68 kg a year per capita.

The meat is cooked slowly. So a good asador knows how much distance to keep between the meat and the coals. Argentinean asadors use wood as opposed to charcoal which also gives the meat a better flavor. The parilla, or grill, here in Argentina has a chain and hand crank to raise or lower the grill and keep the distance between the embers and the meat just right depending on the cut of meat. They’re also designed to keep the grease from dropping on the coals or embers and creating smoke, which would adversely affect the flavor of the meat.

Because various cuts require longer or shorter cooking times, an asador will likely bring out the meat cut by cut as the guests shout out “un aplausa para el asador!” to thank the cook. The meat is usually served with sides dishes such as salad, grilled vegetables, and bread. And there is always enough red wine (vino tinto) for Caesar and his entire entourage.

Other cuts of meat that aren’t often part of an asado, but are the cuts you’ll want to order in a restaurant if you’ve decided not to go the parilla route are bife de lomo (tenderloin) and bife de chorizo (sirloin) and osso buco (shank or osso bucco).

The above image from the American Angus Association and shows which part of the cow’s body each cut comes from. Study up and impress your Argentinean friends. Oh, and it’s customary to bring something with you to an asado. I say bring wine (Malbec goes especially well with meat), but you could bring flowers or a dessert if you prefer. Once you’re back home and have had enough time to recuperate from beef overdoses, the blog Asado Argentina is written by an expat living in Tierra del Fuego. Asado Argentina will show you hot to recreate your Argentinean asado back home. Enjoy!