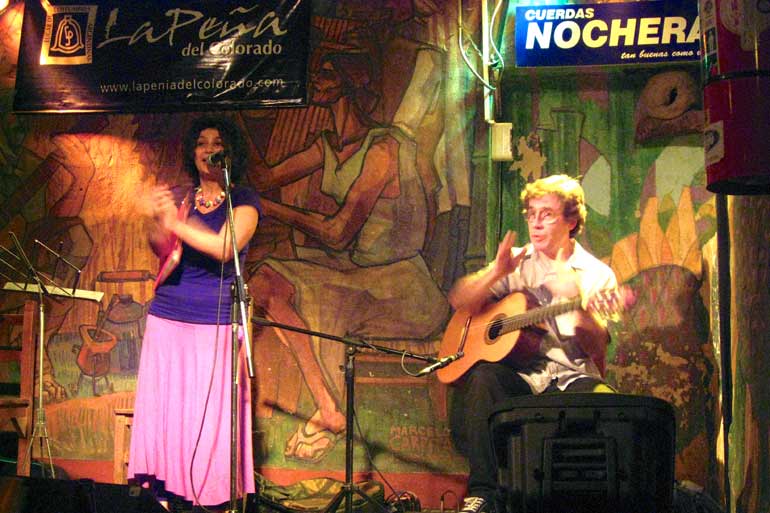 Where do you take a newcomer to Buenos Aires to show him the grittier, more rustic, and way romantic side of the music I so love? La Peña del Colorado of course (we mentioned it in our list of Ten Things to Do in Buenos Aires). The live shows are great, but I also recommend staying later to see the spontaneous guitarists and drunken singers that stick around until dawn. Plan for a late night.

Last Friday we watched La Jury sing her heart out for over two hours. La Jury, whose real name is Luciana, is from Buenos Aires. She sings in the style called “canto criollo.” Here are the names of a few famous criollo singers from Chile, Argentina, and Mexico to help you get familiarized with the style should you want to study up on the style before getting here (Violeta Parra, Mercedes Sosa, Lhasa del Sela, Chango Rodriguez, Oscar Valles, Chavela Vargas).

At first, La Jury was accompanied by Carlos Delgado on guitar and vocals. My memory stick was full, which was a total bummer because Carlos Moscardini’s guitar playing coupled with La Jury’s amazing pipes was truly spectacular. But here is Carlos Moscardini on guitar. Wow!

La Peña del Colorado is located in Palermo/Barrio Norte on Guemes, 3657. Call for a reservation and ask for a table close to the stage. The show was scheduled to start at 10:00 but really began closer to 10:30 (as is to be expected in Argentina). It cost 25 pesos for the show, and we had some dinner, too. Now, let me say that I would not go to La Peña del Colorado for sophisticated dishes or the best of Buenos Aires (here’s the menu). But I love that it is so very typical. Typical parrilla fare. Very good empanadas salteñas. Yummy casseroles of pumpkin with quinoa and goat cheese. Traditional guisos or locro. Tablas of cheese, meats and olives. It’s not creative; it’s traditional. As it should be. If you really want to do things the way the locals do, order a pinguino instead of a regular bottle of wine and ask for a bottle of soda to go with it. The pinguino is actually the shape of the pitcher that the house wine is served in. Because it’s not the greatest quality wine, Argentines often add a bit of soda to it. It’s like a sangria without the goodies. If you’re picky about wine, you might want to get a regular bottle first to have with your food and then switch over to the pinguino when your taste buds don’t care anymore.