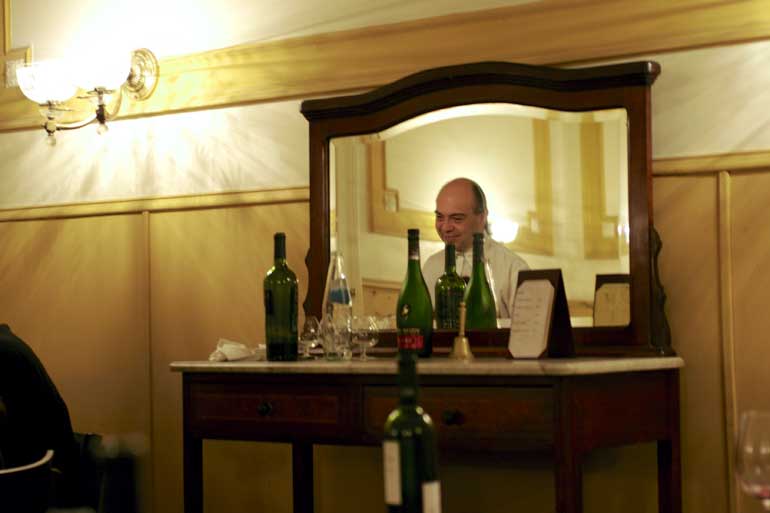 Browsing through the Guia Oleo for restaurants I didn’t know in San Telmo, I ran across the listing for Les Anciens Combattants. We were in the mood for something different and Les Anciens Combattants was intriguing. The pictures of the house, the descriptions and reviews of the food, and the fact that it’s in an area of town we would typically avoid at night are why we chose it. My thinking was that if a restaurant can survive in that neighborhood, it must really serve excellent food.

Constitucion is a rough neighborhood. When our cab driver stopped in front of the only house with lights on the street, I think JB and I both were wondering if we should get out or just head back to San Telmo. We rang the doorbell and waited. The waiter who opened the door asked if we had reservations, we did not. So, he explained in the fastest Spanish I’ve ever heard that they do have a table, but they don’t accept credit cards, only cash.

We followed him through a grand salon with beautiful wooden floors and high ceilings. He told us that he’d give us a tour of the house and tell us its history after dinner. The dining room is toward the back of the house, just before a huge open patio that must be amazing in summer.

Before dinner, we were served an aperitif, white wine with a bit of Cassis. The chef, Alexandre Sourou, comes to each table to explain the evening’s dishes (either in French or Spanish, but I translated from Spanish to English and Alex corrected me when I made mistakes). JB couldn’t resist the raw oysters. Fresh seafood is not easily found in Buenos Aires. And two Louisiana natives in a French restaurant in Buenos Aires are not going to pass up seafood, so I ordered the coquille aux fruits de mer. Both appetizers were amazing. The coquille aux fruits de mer was packed with scallops, mussels, clams, and shrimp in a creamy gratin sauce that had just the right amount of crunch on top. We both ordered gamey main courses: stuffed quail and venison. You can find venison, lamb, boar, and quail in some restaurants here in Buenos Aires, but they aren’t very common. The preparation was beautiful and the doneness was perfect, as one would expect from a French chef. Venison with side of veggies Chef Alex has headed Les Anciens Combattants for roughly five years, but his father was the chef here for ten years and some of the recipes are his. The waiter, Lolu, likes to point out when the recipe is from Alex’s father. They are from the Toulouse area in France and a lot of the dishes have a Toulouse touch that’s unmistakable.

We don’t usually order desserts because we tend to not leave enough room, but the desert options sounded so good that we had to indulge ourselves. JB ordered crepes that were served with a bit of liquor and glazed orange rinds. Crepes to die for

I ordered a dish created by Alex’s father, tomate confit served with a mint liquor and ginger. It was out of this world! Tomate confit with mint and ginger

The wine list was about six pages long and had a nice variety of types and prices. Our meal came out to roughly 450 pesos (about $120 USD). The venison was almost double the price of the other entrees (about 70 pesos) and that bumped our bill up significantly. So while Les Anciens isn’t cheap, the average entree cost around 30 -35 pesos which means it you could spend a lot less and eat one of the best meals in the city.

After dinner, Lolu showed us around the house. He explained that it was built as a guest house for the Canale family that lived in Recoleta about 100 years ago. After the Second World War, it was used to house French soldiers (Argentine-French) who returned from the war. It’s worth it just to visit the house and have dinner in such a stunning setting, but add to that Alexandre Sourou’s talent and I say this is one of the best kept secrets of Buenos Aires. Bon appetit!

A Green Market in San Telmo