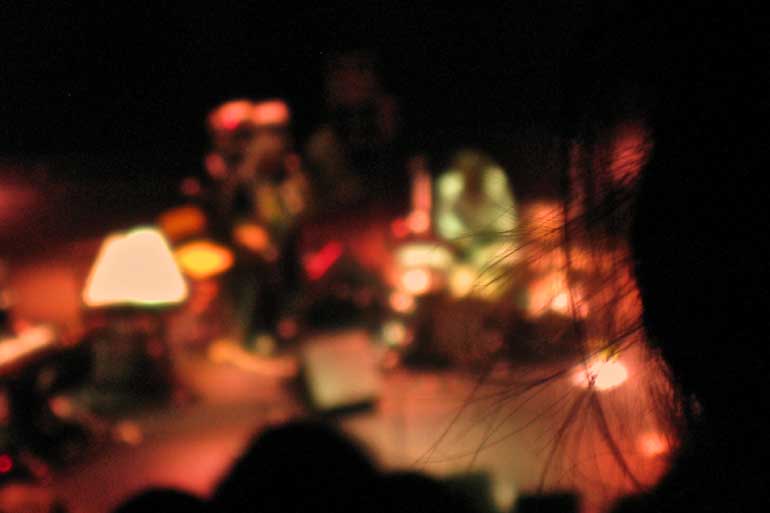 I’ve had a tough week. To top it off, my highlight was going to be the Cat Power concert at Teatro Gran Rex which I went to Thursday night. It may have been the highlight, but it certainly wasn’t the highlight I was expecting. For me, the fun was laughing with my friend Naty and wondering what the concert would be like if only we’d been drunk or on some sort of drug.

At one point, Cat Power disappeared for what seemed like fifteen minutes and we listened to the band improvise the beginning of what should have been (and eventually, 15 minutes later) was the next song. Maybe she had to run to the bathroom, we thought. When she reappeared all she said was a quick, “Sorry.” But when the song got going, and the next song did, and the one after did, they all sounded exactly the same as the first five we’d heard before Cat Power disappeared leaving us with a repeating electronic opening and purple lights, I couldn’t help but wonder if I was just too old to get this type of concert or if everyone else there was thinking the same thing: “WTF!”

Naty pulled her cell phone out of her bag to see if anyone had called. That can’t be a good sign for a performer. I, too, was no longer paying attention to the concert, I wondered if Cat Power is the type of singer that you can like at home because you can mix her up with other groups you like. I almost never listen to one group or album all the way through anymore. They’re grouped by genre or by my playlists which I carefully put together and have a variety of music that is similar, but by various artists. Could I ever listen to Cat Power and nothing else for over an hour?

Each time a song began I’d think, “haven’t we heard this one?” Then Cat Power’s incredibly smoky voice would remind me that I do love her music. I just don’t love it for hours on end. Finally there was a surprise, and for certain, the highlight of the evening. She sang a song in Spanish (here’s the setlist from the concert). It was the only song I felt she cared about all night. Her body language changed and she seemed to connect with the audience.

At the end, I think it was the most boring and strangest concert I’ve seen. It wasn’t just that every song sounded the same and that the songs I most wanted to hear weren’t sung. It was the fact that she made no attempt to connect with us. Besides the one “sorry,” after her disappearance, she never spoke to the audience. Was it because her Spanish is not great? Maybe, but I’d guess that the people who want to see a Cat Power concert understand some English. A simple “Hello, Buenos Aires,” and “thank you for coming,” would probably do the trick. Instead we were left thinking, “WTF?” On another note. If you go to a show on Corrientes, Buenos Aires’ Broadway, the place to head to after for a quick bite is Guerrin. It’s a pizza place, but more than pizza Guerrin is sort of a right of passage for theater goers in Buenos Aires. It’s not the best pizza in town, but it’s good pizza. It’s the atmosphere that brings in the crowds. Pizza and Faina at Guerrin

There’s even a song about this right of passage by the Argentine rock band called Memphis La Blusera. The song is called Moscato, Pizza y Faina.

Here are the lyrics:

The lights turn on,
Corrientes Street,
fills up with people,
that come and go,
leaving the movies,
laughing and crying,
they love, they fight,
they fall back in love,
in the universal,
to end the night out,
moscato, pizza and faina,
moscato and pizza. Pizza and faina is a common combination here in Buenos Aires. Faina is made from chickpea flour and often has herbs or onions mixed in with it. It usually comes on top of the pizza slice so you can cut through both and eat them together. According to the song, and to tradition especially at Guerrin, it’s best with a glass of Moscato.