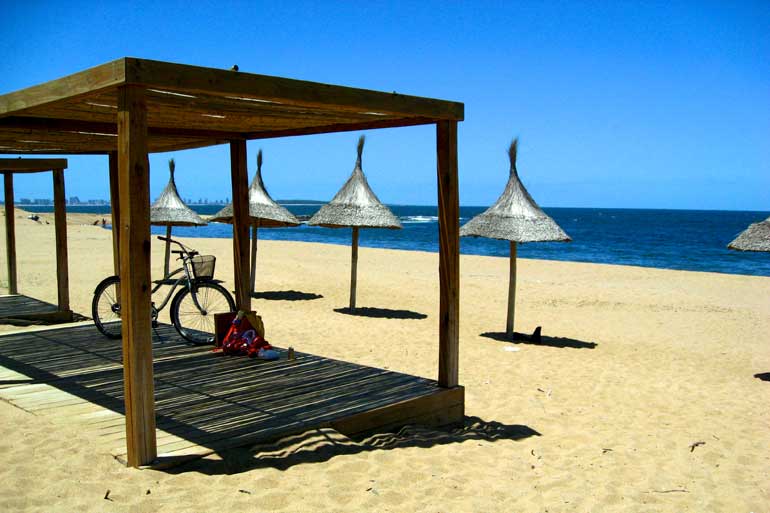 On Sunday, January 3, we took the ferry to Montevideo where we rented a car and drove to Punta del Este. Our biggest worry was that we weren’t going to find a hotel room. Everyone told us we’d be sleeping on the beach. But since I’d taken this picture above just two years ago in January, we thought the beach might not be too bad.

At the port, all of the car rental companies were closed because it was Sunday and the information desk told us that there were no available cars for hire in all of Uruguay until the next week. We considered taking a bus to Punta del Este, but decided to go to the airport just to double check. 
The taxi ride to the airport was beautiful but wild. The drivers, we had to take two taxis because there were five of us, clearly liked driving along the road that follows the beach. It’s called La Rambla. Anyway, it’s a wide and very curvy road. Everyone flies down it. We nearly hit a pedestrian who was crossing on red and not paying any attention at all to the oncoming traffic. These same two reckless drivers told us that we wouldn’t find any cars to rent but that they would be happy to take us to Punta del Este for $300 USD.

Rent a Car if Budget Allows

There were several cars to choose from with Hertz. Some of the other agencies didn’t have any cars available though. So, for $400 USD we rented a car for two days. Later on, we realized how having the car changed our trip completely. I’ll explain.

In Punta de Este, there wasn’t a hotel room for less than $200 USD and some of the rooms were so nasty that you really might rather sleep on the beach. I’d long wanted to go up north, so I convinced the others that we should at least give it a try. And here’s the first time having a car really paid off.

Just north of Punta del Este, we crossed a wavy, roller coaster of a bridge and drove into a town called La Barra. It’s lively, walkable, and supposedly has good beaches with windsurfing and kitesurfing. We got there after dark so finding hotels wasn’t very easy. We stopped in a cafe and asked the owner if he knew where we might go. He sent us to the hostel called Backpackers and said that if they didn’t have space, they’d surely know where we might go instead.

Finding Backpackers was sort of like following a very old treasure map. There were signs on trees or poles with the word Backpackers and an arrow. But since it was so dark, it was hard to see the signs. We found it, parked the car and heard some odd sounds coming from a little pond right in front of the main building. Frogs. On their website, you’ll hear a recording of the frogs. How cool. The yard was gorgeous, the house was bustling but not like a party, in the back there was a pool, barbecue, and a bar, the buildings were all painted bright colors. We’d found the treasure.

They told us that they didn’t have any room and explained that trying to get a room the first week of January in this area was like going to Cannes during the film festival and looking for a place to stay. But the guy who runs the hostel was amazing. He gave us a list of other places and their phone numbers so we could call around before driving all night. He showed us around the hostel in case we wanted to come back when they did have some room available, and during this time that he spent talking to us, people kept coming up with request or question or whatever, he handled them and turned back to us without missing a beat. He’s a real professional and I can’t wait to be able to go back there.

Instead we stayed at La Barra’s second hostel, Hostel Iguana. It’s just down the road from Backpackers and while it’s nowhere near as inviting, it was what we needed. The people working there were kind and helpful (maybe this is just how people are in Uruguay). The rooms were clean and the bathrooms were clean enough considering they’re being used by tons of 20-somethings getting ready for clubbing. We lucked out and four of us got a private room. Our other friend slept on a bunk bed in a room with about 15 or so other people.

It was noisy at times, the lack of AC or fans meant we got eaten by mosquitos because we had to leave the windows open, and like all hostels, you have to be good at sharing. But for $44 USD per night, we felt pretty lucky to have found Hostel Iguana.

Beggars can’t be choosers, but if you are planning ahead and considering staying in one of these hostels, stay at Backpackers. First, there are only 8 beds per room and the beds each have a locker where you can store your bag. There isn’t a key for those lockers, but it’s better than leaving your stuff on the floor or out on your bed. At Hostel Iguana, our friend left 2 shirts and some sandals on his bed to “mark his territory” he said. The shirts disappeared and the sandals were out in the hallway. It’s to be expected really. In hostels, no one really knows who is sleeping where. But in Hostel Iguana, there were more like 15 beds in the regular rooms and it felt a little more disorganized.

In addition to having fewer people per room, Backpackers has some VIP rooms with only 4 beds and lockers with keys. These rooms also have AC, while the regular rooms each have a fan. I can tell you we would have loved to have at least a fan in our room at Hostel Iguana. We got lucky and had a more private room for 4 of us. But the heat was tremendous and leaving the windows open meant getting killed by mosquitoes while closing them meant suffocating. We’re not 21 anymore.

Additionally, the facilities at Backpackers were overall better. There’s a pool and a large yard. The breakfast is more complete, although the breakfast at Hostel Iguana was fine (pastries and bread and coffee). Backpackers is a bit more spread out, so if you actually want to go to bed earlier, you won’t be trying to sleep over partying 20-somethings. However, in either place you may want to bring earplugs. Also, Backpackers has 2 PCs and WiFi throughout the hostel. At Hostel Iguana, there’s one PC (and another one that if it’s not being used by the staff they are happy to let you use) but there’s no WiFi. We needed to book our return ticket and while the staff at Hostel Iguana called Buquebus for us, we had to book online and that meant waiting a good hour while others updated their Facebook pages for our turn at the PC. Oh, and they have bikes there that you can rent. La Barra is a very bikeable town.

Finally, the price is even better at Backpackers. We paid $44 USD each at Hostel Iguana, but the prices are not listed on the website (which reeeeaaaaallllllly bothers me). Backpackers has clearly outlined prices according to the season and some good packages for those planning to stay there a bit longer.

As I said, beggars can’t be choosers and we were very happy that Hostel Iguana had space for us. Plus, the staff really was fantastic. We felt welcomed. We knew they were there to help us if we needed their help. And they were interesting people who clearly love what they are doing.

Treat your Tastebuds in Mendoza