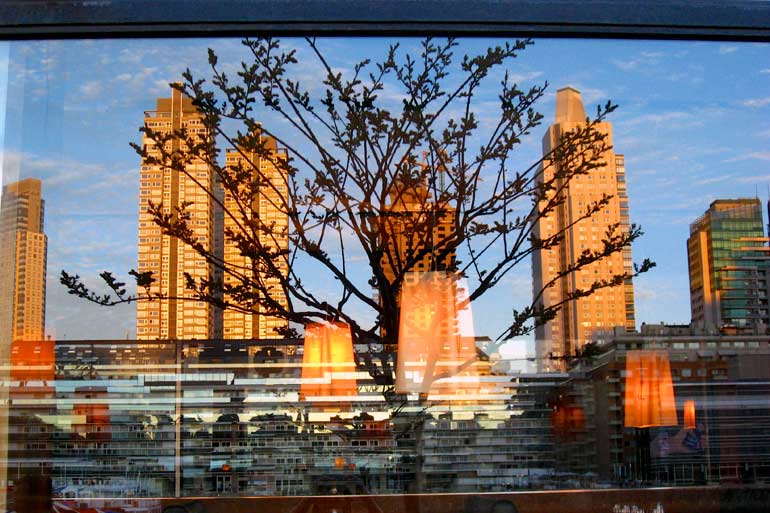 Just two blocks away from San Telmo is the beautiful, albeit a bit sterile, Puerto Madero.  It’s not an area I’d want to live in, but I do like going over there on sunny days to walk along the water or visit the nature reserve.

At the far end of Puerto Madero is the Yacht Club where they also rent out kayaks and boats for rowing. We’ve been watching people row through the basins of the port for a year now and decided we ought to give it a try. Watch this 9-minute video of our outing in Puerto Madero over to the Yacht Club to see about renting a boat or just read below to find out what happened.

Puerto Madero is the most modern neighborhood in Buenos Aires. The port with four basins (diques) and the row of red-brick warehouses (depositos) were built between 1889 and 1898. But the port was only used for a very short time before a newer port just north of the Buquebus terminal was built.

For years, the abandoned port was a rat-infested wasteland and the old warehouses were decaying. When the city decided to revive the area, cafes and restaurants moved into the bottom floor of the red-brick warehouses and the top floors held apartments and offices. This project, Project Puerto Madero Oeste, was unveiled in 1996. The red-brick warehouses of Puerto Madero with the yacht club in front.

The high-rises in Puerto Madero Este only started popping up after the economic crisis in 2001 when foreign investors bought up the cheap land. Oddly, this is now the most expensive area of the city.

The best part of Puerto Madero is the large pedestrian walkways that go along the basins on both sides. Here you can bike ride, roller blade, walk or jog and there are tons of cafes where you can sit in the sun and have a beer or coffee. I wouldn’t recommend too many restaurants in the area though. You can get much better food at a better price in almost any other part of the city. Still, it’s cool that this modern beauty is just across the way from some of the oldest neighborhoods in the city. What a great contrast!

The Yacht Club is located on Dique 4 at the far end of Puerto Madero. It’s a gorgeous setting. I love checking out the boats and dreaming of one day sailing around the world or maybe just over to Uruguay. Rowing past the massive yachts in Puerto Madero.

The rowing club, Puro Remo, is inside the Yacht Club. They rent out boats and kayaks and organize trips along the river or in the reserve. But their website doesn’t list any prices, so we decided to head over there to find out what’s what.

We asked about renting a boat to row for an hour or so in the four basins. The lady at the entrance seemed surprised that I wanted to rent a boat, which of course surprised me because that’s what they do there. She asked me if I’d ever rowed before. I told her that I’d been rowing my whole life basically. Then she asked me where. I told her that I’d rowed in Louisiana, Florida, Texas and Hawaii.

She paused and then said we’d have to take a test. This wouldn’t have bothered me really, but it was her attitude that was turned me off. She said we’d each have to pay 50 pesos ($13 US) to take the test and then if we passed we could pay another 40 pesos ($11 US) to rent a boat for an hour. I asked her if this was their policy for everyone (because she really didn’t seem to like me much). She explained that they have responsibilities and liabilities and we might not have capabilities. And if we aren’t capable, they’ll give us back our 50 pesos and we can sign up for four rowing classes which will cost 250 pesos ($65 US).

Here’s the thing that made us not rent the boats. First, she was rude. But it wasn’t just that. We really wanted to get the information for tourists who might like to spend a day rowing. The way I see it, Puro Remo is not set up for tourists and probably doesn’t even want tourists renting from them. The 50 peso test is more like a membership fee which isn’t at all expensive. But who wants to be spoken to aggressively and have to pull out the information bit by bit until 15 unpleasant minutes later they finally understand if they can or cannot rent a boat from a boat rental company.

I know I’ve lived here long enough to know that customer service doesn’t exist, but she could have said, “sure, you guys can rent a boat, here’s how it works….”

Puro Remo’s website implies that excursions for people with no rowing experience are available but it doesn’t list a price or a time of day or any other information. There’s also a part that mentions rowing for tourists, but again without details of the price, the day, the time or anything else. If the website is correct and they do excursions for tourists, I would think that after I explained to the lady that I was doing research for tourists who might like to row she would have wanted to give me the details of the excursions they have set up. She didn’t.

So, we went back to San Telmo. We were planning to stay in the sunshine in Puerto Madero and have a beer along the walkway. But in the end, Puerto Madero just isn’t our vibe and we found ourselves back in our own neighborhood sitting at the Breoghan Bar on Pasaje San Lorenzo, listening to a sax player. It took us two hours to get from the Breoghan Bar back home because there was just so much going on. The street performers were particularly good this Sunday. At the end of the video, check out the tango orchestra El Afronte. They’ve been playing in the same spot every Sunday for years. You can find them on Humberto Primo, between Defensa and Balcarce just in front of the church. Tourist shows her tango moves with the street performers.

And on Defensa there was a new band playing with a bunch of percussions and horns, this part is at the very end of the video. The crowd loved it. Oh, and the guy dancing in the middle of the crowd, I see him every Sunday and he’s always dancing like that. This man loves music. To me, he’s as much a part of San Telmo as the antique shops are.

What do you guys think? Would you go rowing at this yacht club if you were just here on vacation for a week or so?