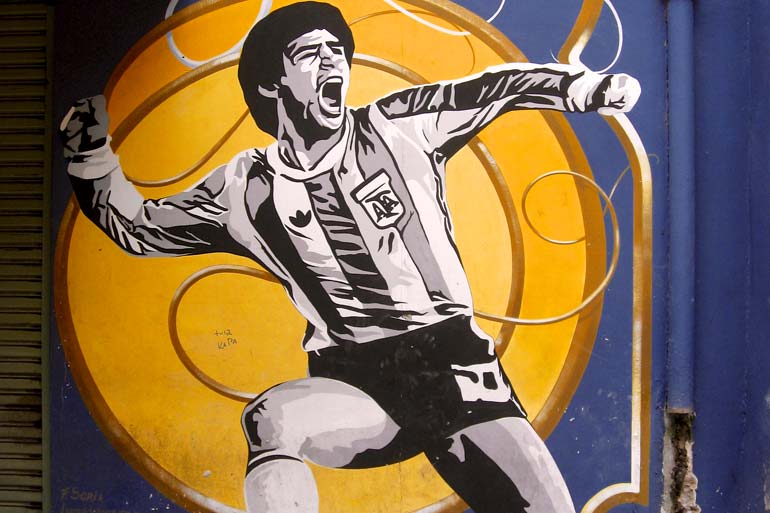 I‘ve been writing about soccer a lot lately and I’m not even a huge soccer fan. But I love the World Cup, and this is my first time being in Argentina during the World Cup. You really can’t be in Argentina right now and not feel the passion.

You also can’t be here right now and leave without knowing that Argentina’s flag is blue and white (even the stores are decked out patriotically). On May 25, Argentina celebrated its Bicentennial and last Monday was flag day. On July 9, they’ll celebrate Independence Day, so we’ve got a few more weeks of blue and white!

But back to soccer. Just what is it about soccer and the World Cup that makes people all over the world go crazy? I think Argentinean commercials do a great job of explaining the madness to those  who just don’t get what this soccer craze is. Watch these two ads with the ones we posted last week and two weeks ago, and I hope you’ll start to feel the craze, too (and root for Argentina on Sunday!)

A Sport for Everyone

In this spot from the 2006 World Cup, you’ll see your average guys pretending they can really kick butt on the soccer field (but typically not kicking butt at all). The point here is that soccer is something we all share and while we may not all be World Cup talents, the team represents all of those back home who would love nothing more than to be there, too.

The song is in Italian (soccer’s roots in Argentina come from the Italian immigrants) and it talks a bit about feeling your heart in your throat and a great adventure. Each time I watch this spot, I crack up at different parts. The guy who tries fancy moves and falls down, the attempted goal that hits the ref in the chest, the coach explaining the play to three guys who look totally lost. Hilarious.

The final words say, “Do it for all of those (us) who didn’t make it there.”

The final words say, “I love you. I hate you. That’s love.” And that’s soccer. And that’s Argentinean passion: love, hate, love, hate.

I Still Don’t Get Soccer

I’m not going to pretend I can explain the ins and outs of soccer, but that’s also not what I love about the World Cup. I mean, it’s not that I don’t care to understand how it’s possible that the US could have been robbed a goal (or two) by bad calls. I do care about those things when I’m watching the game. But that’s not the beauty of the World Cup.

For me, the fun is in watching all of these nations compete (a lot like the Olympics but not as time-consuming). Some nations are there for the first time and everyone is excited for them and rooting for them, to some degree. Some nations are going through difficult periods and everyone is hoping they can shrug off some of the humiliation of whatever it is they’ve been going through because we’ve all been there. Some nations are the powerhouses and you have to hope they lose (France and Italy this year) because they aren’t playing well and don’t deserve to be there. It’s shared globally and it feels good.

Want to read more? Discover Buenos Aires has a great post on World Cup Fever. And there’s another fun post at Road Games called Crazy for the Copa.

Are you a new World Cup fan? What do you love, hate, love, hate about soccer?

8 Comments To This Article… add one