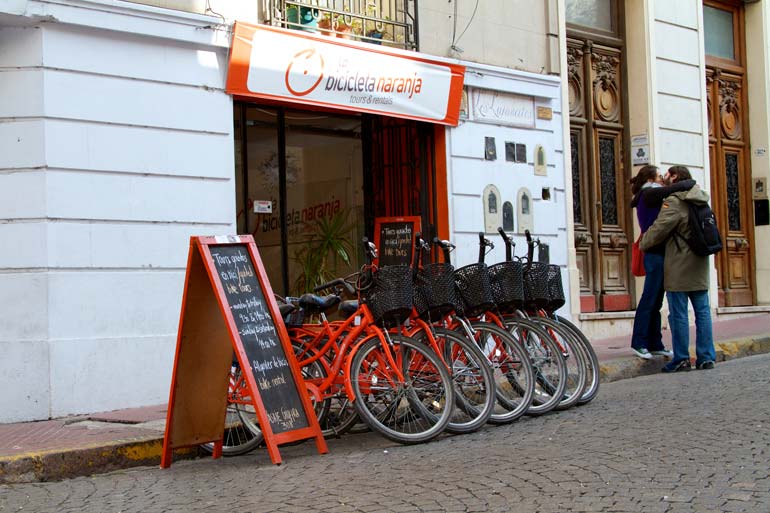 In this video we show you where to rent bikes in San Telmo. Follow along as we ride over to the Costanera Sur for some street food, through the nature reserve and then over to the Parque Mujeres Argentinas to check out the beautiful rose garden with Puerto Madero’s skyscrapers in the background.

Just a few blocks away from San Telmo Loft is La Bicicleta Naranja (The Orange Bike). You can’t miss it. Right on the corner of Balcarce and Pasaje Giuffra, next to the University of Cinema and one of our favorite breakfast spots, Pride Cafe, you’ll see a line of orange bikes with little black baskets.

Then it’s a short ride down Estados Unidos to the Constanera Sur where you’ll see all of the parilla stands grilling meat and serving up sandwiches with chimichuri sauce. The Nature Reserve is right after the Costanera.

We rented two bikes at the hourly rate. We were out for about 3 hours so the total came to 36 pesos (about $9 US). We’ve seen other bike rental spots in the neighborhood but went with the orange bikes because they are well maintained and their rates are better if you’re going out for more than an hour. The other spot has old rickety bikes and rents them out for 10 pesos an hour with no reduced rates for longer timeframes. Here are La Bicicleta Naranja’s rates. (They also have tandem bicycles at slightly higher rates.)

When you rent your bike, be sure you pick up one of La Bicicleta Naranja’s great maps with routes of interest highlighted. You can rent a bike without a guide or take one of La Bicicleta Naranja’s several guided tours. The guides are trilingual and the riding is not difficult since Buenos Aires is pretty flat.

The tour that covers most of the area we visited is called Buenos Aires al Sur (Buenos Aires to the South). It starts in San Telmo, and covers La Boca, the famous Bombonera (Boca Juniors Stadium), the Costanera in Puerto Madero and the Reserva Ecologica (nature reserve). The other tour that starts here in San Telmo heads north and is called Buenos Aires al Norte, of course. Both tours cost 105 pesos (about $26 US) and last between 3 and 4 hours. There are two tours each day from Monday to Friday starting at 9:30AM or at 2:00PM. On Saturdays and Sundays, there’s one tour which starts at 2:00PM. La Bicicleta Naranja has a second location in Palermo on Nicaragua, 4825. Two tours take off from this location: Buenos Aires Aristocratico (Aristocratic Buenos Aires) and Buenos Aires Lagos y Bosques (Buenos Aires Lakes and Tours). These tours also cost 105 pesos (about $26 US) and they leave from the Palermo location every Monday – Saturday at 2:00PM.

There are other tour companies here in Buenos Aires that give bike tours. Have you guys ever tried any of the others? Got any recommendations?