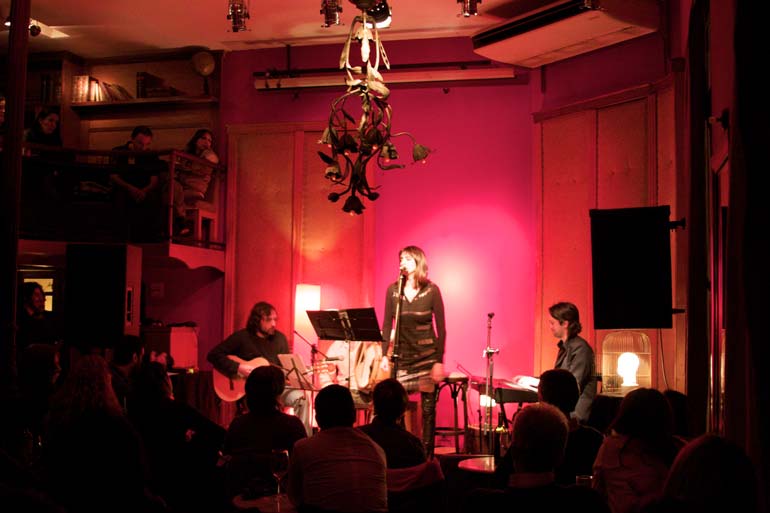 Some tango-loving friends of mine introduced me to La Jaula Abierta, a really cool spot for live music (watch our video below) here in San Telmo. It’s in a small, intimate bar right above Cafe Rivas on Estados Unidos and Balcarce, just a few blocks away from San Telmo Loft.

La Jaula Abierta has closed but the place is now called Arriba de Rivas and they are still putting on shows. Check the links in the paragraph above.

For me, the show at La Jaula Abierta represents what I fell in love with about Argentina and why I moved here. Music. Spontaneous groups of all walks of people who are all musically inclined in one way or another. The first times I visited Argentina, I’d be invited to people’s houses for dinner or maté or whatever and inevitably someone would pull out a guitar. What amazed me though was that everyone, I mean everyone, would either sing or play an instrument at some point in the evening, which would typically last until sunrise (especially if there was enough Fernet con Coca around too keep us all awake).

Clearly many of the people at La Jaula Abierta are professional musicians, but others are more famous for acting and modeling. It’s sort of like getting an invite to a private party packed with celebrities who take turns on stage singing. And can they sing!

*Please note that some of the links below are Amazon Affiliate Links.

and my favorite performer at La Jaula, Rita Cortese, who also sings the second song in the video. You can read the lyrics and watch a video with Carlos Gardel’s version

and some images of Gardel here.

This song is also the title of an Argentinean documentary

. It was written by another incredibly famous tango singer and composer, Francisco Canaro

about Falcon’s famous green eyes. Falcon disappeared from public life at the height of her fame. The documentary seeks to solve the mystery of her disappearance. There’s a great YouTube video about Falcon’s life, but don’t watch it if you are planning to watch the documentary (spoiler alert).

Each time I’ve been to La Jaula Abierta, Dolores Sola, Rita Cortese and Carolina Peleritti (pictured in the photo at top of post) act as the hosts. They’re playful and funny. Their interactions with each other and the audience really make it feel like you’ve been invited into someone’s home.

. That note she hits at the beginning of the song is out of this world! Here’s a video of Lidia Borda with Hernan Lucero

, who also performs frequently at La Jaula. If you speak Spanish, the intro will give you an idea of the atmosphere of the place. The song they’re performing was written  by Hernan Lucero.

You can never really tell who’s going to show up though. The first time I went to La Jaula, I got to see one of Argentina’s most famous folklore singers, Teresa Parodi

. Here’s a video of Parodi singing a sad but absolutely beautiful song, Oración del Remanso, at La Jaula back in June.

La Jaula Abierta has only been open for a few months at most. The price has already increased three times, it currently costs 50 pesos to get in. Reservations are absolutely necessary as it’s already selling out weeks in advance. The show starts around 9PM and they serve dinner. Call to reserve a table: 4361-5539.

We tried to get reservations for the 19th of August but they’re booked until Sep. 9. In other words, if you want to go to La Jaula, do call in advance because this place is full.