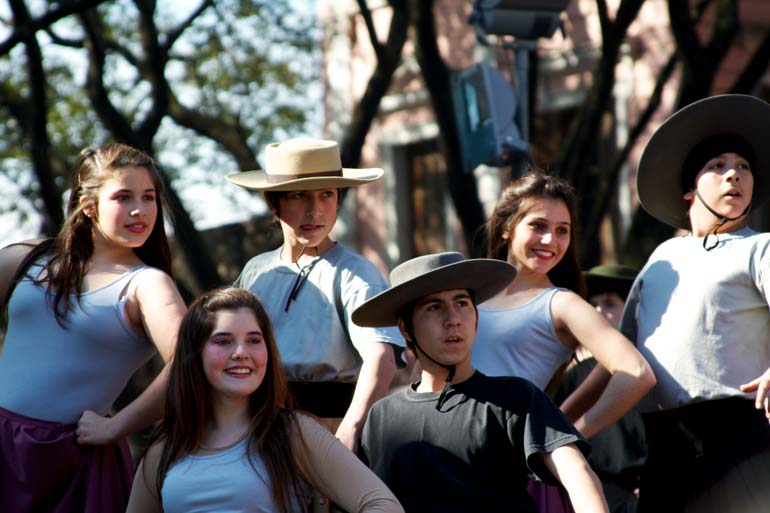 Rowdy folklore and dancing, skillful horsemanship, manly gauchos (Argentinean cowboys), inexhaustible amounts of grilled meat, empanadas, and other regional foods, fairly priced and beautifully handcrafted arts & crafts. Oh, yes. I do love the Feria de Mataderos. It’s one of my favorite Sunday activities in Buenos Aires. Watch our video to see if you want to add Mataderos to your list of things to do in Buenos Aires.

John and I went to the fair with an Argentinean friend and one of our long-term guests staying in The Pad. It was the first time any of them had gone. Sole laughed when I asked if she’d been to the fair before. “No, that’s for tourists, not porteños,” she said. Once we arrived, she realized her mistake. There are a few tourists, only those who’ve found the one paragraph most guidebooks devote to the fair or those who know someone here who has recommended it. But these are not your average tourists. Though we also didn’t see many average porteños (Buenos Aires locals) at the fair either.

That’s a large part of the beauty of the weekly Feria de Mataderos. It’s a neighborhood fair held for people who love folklore (Argentinean folk music) and it’s unlike anything you’ll find in the city. From San Telmo to Mataderos

The neighborhood the fair is named after, Mataderos, is where the city meets the country. It’s one of the last barrios (neighborhoods) still inside the district of Capital Federal and in the past this was where the cattle was brough in from the provinces to be slaughtered and distributed to the rest of the country. In fact, Mataderos means slaughterhouse in Spanish. This neighborhood is also called Nueva Chicago because it share its slaughterhouse role with its U.S. counterpart.

Smoke from the grills and a stack of chorizos.

While the slaughterhouses have moved elsewhere, the fair is packed with parillas (grills) and loads of meat. Just look at the smoke hovering above the stands and under the trees in our opening shot of the video and you’ll get the idea.

My favorite part is the music and dancing on and around the stage in the main plaza. The Sunday that we went was El Día del Niño (The Day of the Children). There were groups of kids performing traditional zambas and chacareras (Argentinean folklore rhythms) on stage.

Dancers performing a zamba on the main stage.

I love how the boys in the chacarera show off their fancy footwork. And the handkerchiefs in the zamba with the girls’ flowing skirts, their rounded arms and slight embraces is just beautiful. The group of younger kids (mostly girls) in the video are playing the traditional drum of folklore. It’s called a bombo legüero and these kids were fantastic.

Gaucha, clapping to the rhythms of folklore.

Around the stage you’ll see plenty of other couples dancing, too. Some are dressed in traditional gaucho wear; others are in boots and jeans. I don’t really know the steps, but I’ve often been invited to dance with a local and it’s not that difficult to fake some ability to dance if you watch the women next to you and just do as they do. Jump right in if the urge hits you. The fair really is a celebration of guacho culture. Just down the road from the main stage you’ll see gauchos on horseback in full gear. Beautiful gear. Their stirrups look nothing like the ones you see back in the States. Gaucho pants are called bombachas (which incidentally is also the word in castellano for underwear). They use either a sash-like belt or a leather one with fancy medallions and typically have a knife tucked in at their back.

La Carerra de Sortija, or the Race for the Ring.

At about 3:00 pm, a group of gauchos will start warming up on Av. Lisandro de la Torre for the Carerra de Sortija (Race of the Ring) where they’ll race their horse down the road, standing up as they reach a metal frame with a small ring dangling from it. The idea is to use the stick in their hand to pull off the ring. It’s pretty impressive.

Agustin, the youngest gaucho, races for the ring.

As is fitting for El Día del Niño, in our video only the youngest gaucho actually grabbed the ring.

Street Food: What to Eat

The asador tending to the barbecue.

The fair offers some of the best regional food in the city. But don’t expect to be able to ask for your steak to be cooked medium rare. The meat is slow-cooked with lots of hands tending the fire. You might want to try the vacíopan (flank steak sandwich) or the choripan (sausage sandwich). There are plenty of other options, too.

Homemade empanadas, little half-moon pies stuffed with meat, or chicken, or corn (called humita here), or ham and cheese, or onion and cheese. If you want something more hearty try the locro (a corn-based stew which sometimes has tripe) and tamales(corn dough filled with a shredded meat stuffing and wrapped in husks; tamales here are never spicy).

Damon digs into some locro.

In the main plaza, behind the stage, there are lots of tables and chairs where you can actually sit down and have a glass of wine or a beer with your street food. And, of course, there are several restaurants with outdoor tables all along the streets of the fair. The food there is pretty much the same as in the stands, but you’ll have a waiter and you can sit and watch the show or the people for as long as you like.

Shopping: What to Buy

It reads, “Hold on to me tight and suck on me slowly.”

Another great reason to go to the Feria de Mataderos is to buy gifts to bring back home. The prices are much better than in the city and you’ll find a lot of traditional Argentinean arts & crafts that you won’t see elsewhere. Maté cups (cups traditionally made from gourds used for the ubiquitous tea-like infusion gauchos drink) and bombillas (the metal straws with a filter that you drink maté through), handcrafted knives with elaborate details, ponchos made from llama or alpaca, cool wine racks made from horseshoes, handcrafted jewelry, toys, and candles, you name it. Handmade jewelry stand at the fair.

There are also a lot of stands filled with local foods like cheese, alfajores (traditional cookies that are like a shortbread sandwich with caramel in the middle), marmalades and preserves, liquors made from eggs or chocolate or even dulce de leche liquor. And if you think you might want to buy some gaucho bombachas, this is the place to do it. Way better prices than in the touristy shops in the city.

When The Fair Takes Place

The fair takes place every Sunday (from April through December) and on Saturday evenings starting at 6:00 pm during warmer months (in February and March). It’s closed in January.

It’s a bit of a hike (close to an hour bus ride) to get out to Mataderos. If you’re in the Palermo area, you can take the 55 bus. If you’re in San Telmo, you’ll need to get to Retiro first and then take the 92.

You could also take a taxi if you don’t want to try the bus routes. Our taxi from San Telmo cost us roughly 40 pesos (at 10 pesos each it was probably worth it to get us out there early). We took the 92 bus back to Retiro when time was not an issue. I also just ran across a review on Trip Advisor written by a guy here in Buenos Aires that offers trips to the fair in his Lincoln Town car.

Other Blogs on Mataderos

Buenos Aires Tours has a great post about the Feria de Mataderos and some videos of gauchos in the Carerra de Sortija. And another expat blogger, Sallycat, has a fun write up about her trip out to the fair which ended up being a trip to the neighborhood as it was summer and the fair wasn’t happening. And lastly, Travel with Pen and Palate Argentina has a nice post with some wonderful photos of the fair.

Have you been to the Feria de Mataderos? What was your favorite part of the fair?

6 Comments To This Article… add one