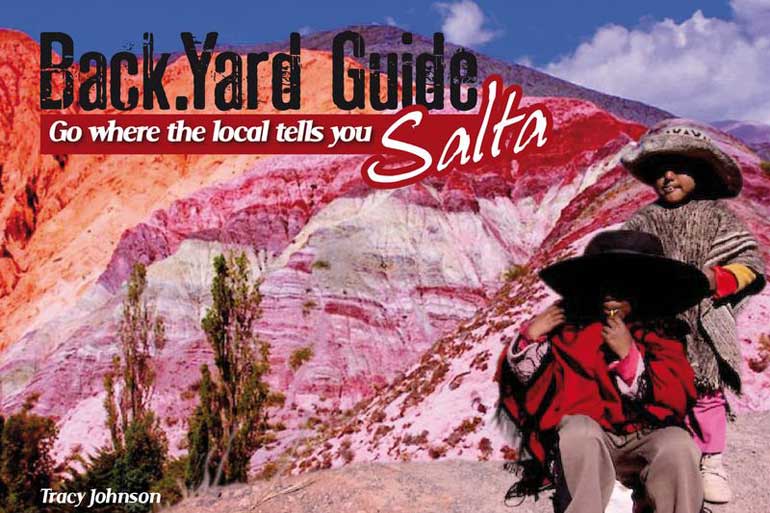 Salta is the most colonial of cities in Argentina and the surrounding landscape and indigenous small pueblos make a visit of at least a week well worthwhile.

Hotel Options in the City of Salta

Arriving in the city in the afternoon is ideal so as to get to the hotel during the tranquillity of siesta. The evening and the following day will be sufficient to see everything in the city as it is mostly located around the main plaza, 9th of July.  I like the San Francisco Hotel or Bloomers for the proximity to everything and Legado Mitico for the design conscious. KKala hotel is absolutely lovely with a view over the city but is a fifteen minute walk from the centre. (See our map of the city of Salta for hotel locations) If you are at the San Francisco Hotel you have everything within easy walking distance. Walk up Caseros past the San Francisco Church (check the Broadway musical curtains above the porticos). When you reach the plaza, visit the MAAM Museum (El Museo de Arqueología de Alta Montaña) to see the perfectly preserved Inca children sacrifices. Closed Monday. Entry 30 pesos. The café at MAAM is nice and has Wifi and a view of the sugarey-pink Cathedral. Also on the plaza – the Cabildo (government building) containing the museum of NW life and a good view from the upstairs terrace.  On the right hand corner is a modern art museum with a new café. (See our map of the city of Salta for locations) Cable Car and City of Salta, by Emilia Garassino

For staying outside, walk along Caseros in the other direction from the hotel, past the old convent and left to Guemes street and the Guemes memorial (He’s a superstar around here for defending independence with his gauchos– his body is in the Cathedral). Take the ascending path – there is a small museum of anthropology – then walk up the 480 million year old Cerro San Bernardo for a good view of the city at the top (here’s a post about the walk). Take the cable car back down.

If it’s Sunday, Balcarce street for five blocks in front of the station is closed for strolling through the artesan market. With an extra day, take the 7E bus on San Martin outside the cable car to San Lorenzo. Walk in the cloud forest and have lunch by the river or in the castle hotel.

Eating and Music in Salta

There are two kinds of restaurants in Salta – the traditional parilla (grill) and the cocina de autor (innovative chef’s creations). El Charrua (Caseros 221) and Jovi (on the corner of Balcarce and Rivadavia) are my favourite parillas for steak also serving seafood. Monumental on the corner of Vicente Lopez and Entre Rios is very traditional in the smoking grill sense.

For a nouvelle meal, Jose Balcarce on the corner of Necochea and Mitre offers ‘Cuisine from the Andes.’ At Casa Moderna, Espana 674 (not at all modern – an old grocery) there is a bar-resto in the back for Spanish style snacking – have a bottle of Salta wine and some pulpo (octopus).

If it’s Salta it’s got to be folklorico. There are various peñas (folk taverns) on Balcarce. Or head a bit further out to  La Casona del Molino – take a cab up Caseros (20 blocks north of the plaza)- it’s full of locals and music.

After a day or two in the city, It’s time to see the varied coloured rock formations and try the local wines. There are two unmissable ‘circuits’, one to the north, the other south of Salta. Don’t even think of taking day trips and returning to the city at night, distances are large and the roads are small and you’ll want to enjoy the pueblos after the tours have left. To see everything in the area a minimum of four days is needed but six is ideal. The blog at Northwest Nomad Trips shows these trips in detail.

To the South, travel through the 65 million year old Quebrada de las Conchas to Cafayate and sample some Torrontes vino at the highest bodegas (wineries) in the world. 65km to the south are the Quilmes Sacred City ruins. From Cafayate a trip through the spectacular Quebrada de las Flechas takes you to unspoilt pueblos and to Cachi. From Cachi, you head back through the Cactus Park and a sometime hair-raising drive down the side of a mountain to Salta and on to the north. Salt Flats or Salinas Grandes by zaqi on Flickr

The north is completely different from the south with highly indigenous adobe pueblos. Stay a couple of nights in Tilcara, where you can visit the 9th century hill-top fort or Purmamarca for the Seven Coloured Hill (seen in the photo beginning the post) and drive up to 4200 metres above sea level and visit the Salt Flats.

The music, wine and food and the constantly changing landscape from rain-forest to high altitude desert is sure to enchant in Salta/Jujuy.

*This is our first guest blog post. I asked Tracy Johnson to write up a piece on Salta because our guests in San Telmo Loft that have booked tours with her company, Northwest Nomad, raved about Tracy and their tour.

Thanks, Tracy! We’re hoping to get up there next month and looking forward to seeing you again.