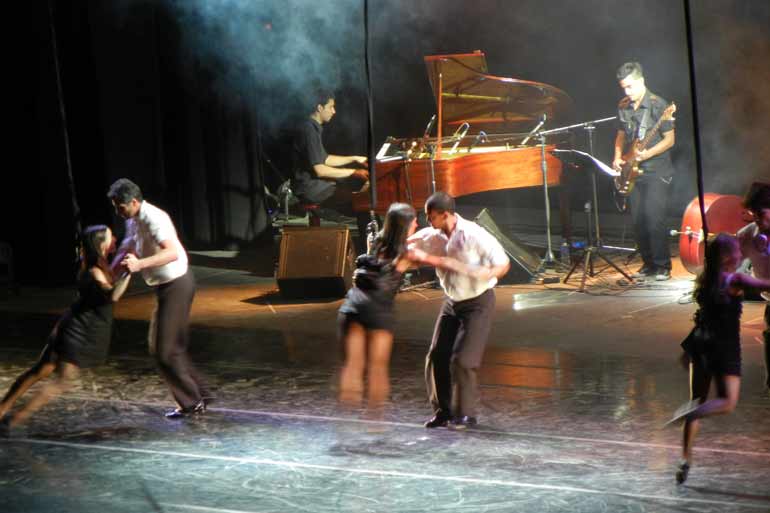 Every summer, the city of Buenos Aires puts on a fantastic outdoor festival and music, dance, theater, and cinema. Verano en la Ciudad is already underway. Events are all over the city so it’s also a great way to head out to areas outside of the tourist circuit. So what’s on the agenda for the remaining three weeks? Here are the events that I’m hoping to get to see.

Free Concerts in Puerto Madero on the Costanera Sur

This weekend there are three free concerts in Puerto Madero’s Costanera Sur. They begin at 20:30. For the past decade or so, Argentine musicians have been mixing rhythms and instruments not typically heard together.  You’ll hear hints of Andean music fused with more traditional folklore rhythms like chacarera and zamba. Rock and jazz mixed with bossa nova. Accordions and violins with electric guitars and synthesizers. The result is a hybrid of overlapping styles and sounds that show off the diversity of Argentine music.

The first concert is tonight. Chango Spasiuk, an accordion musician from the Northeast, fuses chamamé and polka.

On Saturday Luis Salinas returns. We saw him two years ago. He takes traditional folklore and mixes it up with jazz and rock and bossa nova. The fusion is fantastic. Here’s a short clip from the concert two years ago.

And on Sunday it’s Los Nocheros, one of the most popular folklore groups for the past ten years. They’re more traditional than Chango and Salinas. If you aren’t familiar with chacarera and zamba, come hear this group from Salta. This is the music that made me fall in love with Argentina ten years ago. Outside of Buenos Aires (and here, too, but not as often), people get together for an asado and every person there can either play an instrument or sing. They’ll sing and dance and eat and drink all day and night. Here’s a video of Los Nocheros playing a few days ago in the huge festival Cosquin Rock.

Later in the month, from February 15 – 24, head to Parque Roca for free rock concerts (schedule and links).  These concerts begin at 17:30 and they’re big. Three different groups perform each night. To give you an idea of how big they are, let’s look just at the final night of the festival, February 24, when IKV, Javier Malosetti, and Amel will perform. Big names and a big show. All three have ties to Argentine legends.

And Gustavo Spinetta, nephew of Luis Alberto Spinetta, is the drummer for the band Amel. As expected, their sounds are also a fusion of funk, punk, rock, pop and jazz.

Head to the neighborhood of La Boca for tango. This weekend, on February 2 & 3, the show starts at 17:00, still giving you enough time to make it back to Puerto Madero for the folklore concerts that begin at 20:30. At the Usina del Arte (schedule of events) you can listen to live tango musicians and watch professional dancers and even take a tango class if you get there by 17:45. On Sunday, the show starts with Omar Mollo and ends with an electronic tango milonga with the DJInca and another DJ from ZZK Records. Stay for the milonga whether you are dancing or just watching. You’ll likely see a huge variety of tango styles and skills.

There’s more than just music so be sure to visit the official site for the festival and search either according to day, venue, or type of event. I’m hoping to get to see the performances at the Polo Circo, too. Acrobats and music and cirus-type performances. It sounds great.