Argentina has made it to the semi-finals of the World Cup for the first time since 1990. Are you going to watch the match against The Netherlands today? If so, find an Argentine flag (that shouldn’t be hard to do since it’s also July 9, which is Independence Day) or at least wear blue and white, and get ready to focus intently. Watching a World Cup match in Argentina is not like watching a football game in the States. You need to pay close attention. And don’t get all bold and bragging or you’ll jinx it. Remember, it is never over until it is over.

This is a big deal. A really big deal. If you are in Buenos Aires, but not paying attention to the World Cup, soon you will not have a choice. Everything will shut down. You won’t find a taxi. You will find a bus or two, but not more. Buenos Aires becomes a ghost town. Here, read this post I wrote four years ago transcribing one of my favorite World Cup commercials. It will help explain just how passionate Argentines are about futbol and it’s one of my favorite posts we’ve written. Guess I’m a sucker for the albiceleste.

Things have changed a bit since the last time I wrote about good places to watch World Cup matches in Buenos Aires. This time around, we like Gibraltar on Peru St. between Estados Unidos and Independencia. But it can get crowded and there aren’t a ton of seats, so keep Breoghan on Bolivar in mind, too. Try also La Puerta Roja on Chacabuco and Las del Barco on Bolivar. Krakow on Venezuela is another good option. There is a Pinterest board for Where to Watch World Cup Matches in Argentina. You’ll find some good suggestions there and all over the country. Plus, you can add to the list if you find a great spot.

Watch the Match with a Huge Crowd

Plaza San Martin in Retiro is the best place to watch the match with hordes of people. Sure you will be outside in the elements and you might not have the best view and getting a Quilmes might prove challenging, but you’ll be completely surrounded by albiceleste fans. Fun!

Where Else to Watch World Cup Matches in Buenos Aires

Be sure to check out Sorrel William’s fun read about where to watch the various World Cup matches if you are looking to pair the teams playing with the food you eat. Landing Pad BA also has a great list of go-to places throughout the city.

It’s been a great World Cup for Argentina. Messi scored a goal in the 90th minute in their match against Iran. Di Maria scored a lovely goal against Switzerland and showed his love to the world. 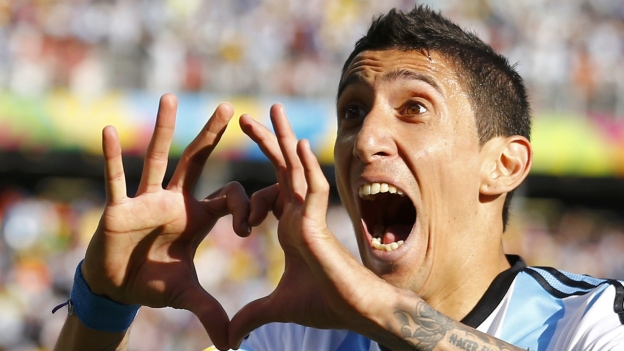 And in the last match, Higuaín scored early on and we all breathed a sigh of relief and then held our breaths the rest of the match. When he almost scored another goal, Alejandro Sabella, the coach, nearly fainted (not really) and started one of my favorite World Cup memes yet.

For more Sabella memes, check out our absolute favorite snarky local news provider, Bubblear. And do subscribe to them. You’ll thank me. Argentines are not cocky about their team or their chances. There’s plenty of reason not to be cocky. Argentines are actually quite superstitious. Though, probably not quite as superstitious as the Brazilians. But maybe that is because the Pope is most certainly praying for an albiceleste win. Want to learn a bit more about the Argentine team? Check out Anuva Wines’ post describing the albiceleste or dig deeper into the star we are all watching and read this longer piece “Lionel Messi is Impossible,” to learn just what it is that makes Messi the best player in the world (sorry, Ronaldo…. not!). Opening Image Credit: Shutterstock (Argentine flag)